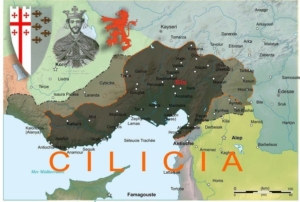 From early antiquity, the Armenian people developed a rich and distinctive culture on the great highland plateau extending from eastern Asia Minor to the Caucasus. On that crossroad, they interacted on many levels with civilizations of the Orient and Occident.

The Armenian Kingdom of Cilicia, also known as Cilician Armenia, Lesser Armenia, or New Armenia and formerly known as the Armenian Principality of Cilicia was an Armenian state formed during the High Middle Ages by Armenian refugees fleeing the Seljuk invasion of Armenia.

Located outside the Armenian Highlands and distinct from the Kingdom of Armenia of antiquity, it was centered in the Cilicia region northwest of the Gulf of Alexandretta. 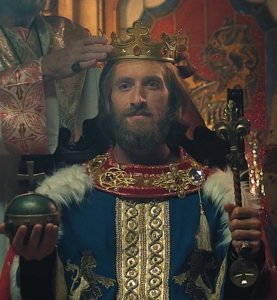 In 1198, with the crowning of Levon the Magnificent (1150-1219) of the Rubinyan dynasty, Cilician Armenia became a kingdom.

In 1194–1195, when he was planning to receive the title of king, he instituted a union of the Armenian church with Rome. With the signing of the Act of Union, his coronation proceeded without delay. He was consecrated as king on 6 January 1198 or 1199, in the Church of Holy Wisdom at Tarsus. His accession to the throne of Cilicia as its first Armenian monarch heralded into reality not merely an official end to Cilicia’s shadowy umbilical connection to the Byzantine Empire, but also a new era of ecclesiastical co-operation with the West. A skilled diplomat and wise politician, Leo established useful alliances with many of the contemporary rulers; he also gained the friendship and support of the Hospitallers and the Teutonic Knights by granting considerable territories to them.

Situated at the northeastern corner of the Mediterranean Sea, Cilicia was conquered by the Persian Achaemenians, Alexander the Great, and the Seleucids of Syria in the pre-Christian era. It came under Armenian rule for the first time during the reign of Tigran the Great in the first century B.C. Centuries later, the waves of westward migrations after the collapse of the Bagratuni kingdom in Greater Armenia culminated in the establishment of the kingdom of Cilician Armenia in the twelfth century.

In 1226, the crown was passed to rival Hethumyans through Levon’s daughter Isabella’s second husband, Hethum I. As the Mongols conquered vast regions of Central Asia and the Middle East, Hethum and succeeding Hethumyan rulers sought to create an Armenian-Mongol alliance against common Muslim foes, most notably the Mamluks. In the thirteenth and fourteenth centuries, the Crusader states and the Mongol Ilkhanate disintegrated, leaving the Armenian Kingdom without any regional allies. After relentless attacks by the Mamluks in Egypt in the fourteenth century, the Cilician Armenia of the Lusinyan (Lusignan) dynasty, mired in an internal religious conflict, finally fell in 1375.

Armenian Cilicia experienced a brilliant cultural era known as the Silver Age, with major advances in science and medicine, theology and philosophy, astronomy and musicology, art and architecture. Despite its successes, however, the Armenian kingdom, caught in the geopolitical contests among the major powers of the time, finally fell to the invading Mamluk armies in 1375. Nevertheless, Armenian life in Cilicia, as across the historic homeland, continued under Ottoman rule for four centuries, until the calamitous events from the late nineteenth century to the genocidal years from 1915 to 1922 ended the Armenian presence there.